BNS Iyengar: A master of pranayama 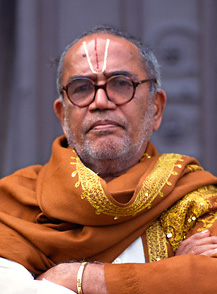 Our guru this month is BNS Iyengar.

When I last practiced in Mysore in 2008 and 2009 I practiced Ashtanga at KPJAYI under the tutelage of Sri K Pattabhi Jois and Sharath Jois and studied pranayama daily with BNS Iyengar. The pranayama I learnt with him was one of the most profound techniques I have learnt in my years of practicing and studying yoga.

BNS Iyengar (not to be confused with his name sake and fellow Krishnamacharya student BNS Iyengar) has practiced yoga for over 70 years. He was a young man during the early days of Ashtanga Vinyasa Yoga in Mysore, and studied directly with Sri T. Krishnamacharya and Sri K. Pattabhi Jois.

He was born in 1927 in a small village in South India called Hemmige Agrahara. His education took place primarily in Mysore. He studied Yoga with Sri T. Krishnamacharya in Jagan Mohan Palace from 1943 to 1948.  When Sri T. Krishnamacharya left Mysore in 1948, Iyengar continued to study with Sri K. Pattabhi Jois for another 12 years.  In those early days he received a thorough education in Ashtanga Vinyasa Yoga and mastered Asana as well as Pranayama, Mudra, Vinyasa Vidya, Nyasa Vidya and many other related subjects. Sri BNS Iyengar’s academic education, both with Sri T. Krishnamacharya and the Maharaja’s Sanskrit College, was long and in-depth. It included study of the Vedas, Upanishads, Puranas, Bhagavad Gita, Patanjali Sutras, and many other scriptures. He received a BSc degree from Mysore University. His education also included Ayurveda, Astrology, Physiology, Sanskrit Grammar, Chanting, and Classical Indian Music.

BNS Iyengar then spent 8 years developing his personal yoga practices, especially Pranayama and Mudra. He now teaches at the Sri Patanjala Yoga Shala at Parakala Mutt in 1984 a beautiful old shala close to the royal palaces of Mysore.