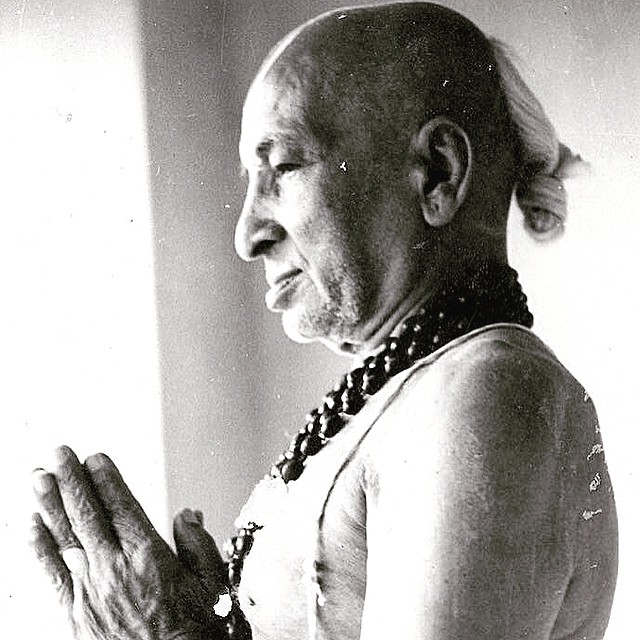 Tirumalai Krishnamacharya was an Indian yoga teacher and ayurvedic healer. Often referred to as "the father of modern yoga", Krishnamacharya is widely regarded as one of the most influential yoga teachers of the 20th century, even though he may not be as widely known as other 'gurus' in yoga.

Born in 1888 in Mysore, India, Krishnamacharya received his first instruction in Sanskrit and yoga from his father. He went on to attend the Royal College of Mysore and later spent seven years studying in Tibet. He returned to Mysore in 1924 and later opened a yoga school. It is here he developed what is now known as Ashtanga Vinyasa Yoga. Each movement is coordinated with prescribed breathing and drishti, "gaze points" that focus the eyes and evoke deeper concentration. Eventually, Krishnamacharya standardized the pose sequences into three series consisting of primary, intermediate, and advanced asanas. Students were grouped in order of experience and ability, memorizing and mastering each sequence before advancing to the next.

As Krishnamacharya started to work with more people from all walks of life and in different states of health, he discovered new ways to teach them. As students with less physical aptitude came, including some with disabilities, Krishnamacharya focused on adapting postures to each student's capacity.
As a result of the teachings he received from his father and other instructors, Krishnamacharya approached every student as unique, in the belief that the most important aspect of teaching yoga was that the student be taught according to his or her individual capacity at any given time. For Krishnamacharya, this meant that the path of yoga would mean different things for different people and that each person should be taught in a manner that he or she could understand clearly. This approach, which is now usually referred to as Viniyoga, became the main inspiration of Krishnamacharya's teaching during his final decades.

Though Krishnamacharya developed this manner of performing yoga during the 1930s, it remained virtually unknown in the West for almost 40 years. Recently, it's become one of the most popular styles of yoga, mainly due to the work of four of his most famous disciples— Pattabhi Jois, BKS Iyengar, Indra Devi, and Krishnamacharya's son, T.K.V. Desikachar, who all played a huge role in popularizing yoga and his teachings in the West.